Jazz themed post for today - inspired by a local jazz singer I've had the pleasure of meeting and getting to know recently. So Nina - this one's for you. 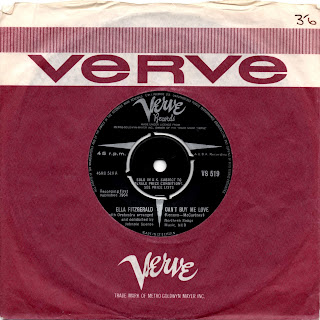 Released in 1964 this is Ella's take on the Beatles' "Can't Buy Me Love" - which until recently (ie last weekend) I didn't realize that she'd recorded at Abbey Road studios.  As she wanted to record her version in the studios where the original was created.  It's this rather excellent version, that Ella pretty makes her own, that open a lot of doors for Lennon & McCartney/The Beatles as it meant that the serious music establishment began to take notice of what they were doing. Plus also giving them a lot more creative control as a consequence. 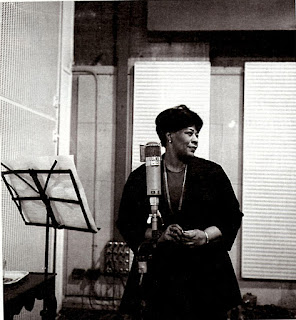 The flip side is Ella's version of the Richard Rogers' "The Sweetest Sounds" - again recorded at Abbey Road - with arrangements like those on the A Side by Johnnie Spence.  Although I'm wondering who's the producer on this - was it Verve's label boss Norman Granz - or could it even be George Martin? 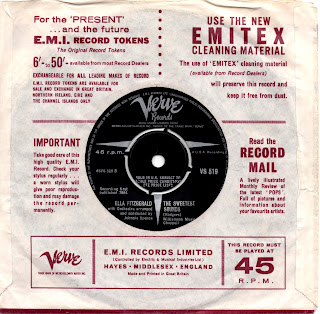 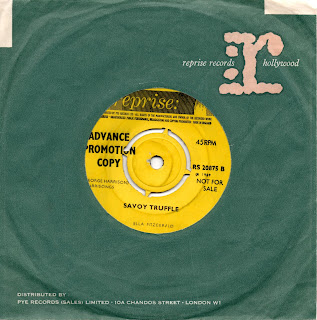 Next up this promo copy of the other Beatles track Ella did - and one that probably not a lot of people are aware she did.  A cover of George Harrison's "Savoy Truffle".  It's from Ella's first album for Reprise - and the parent LP also includes a cracking N. Soul styled version of 'Get Ready' as well as a sublime cover of Smokey's 'The Hunter Gets Captured By The Game'.  It comes within a year of another cover of George Harrison song - Sinatra's version of 'Something' which was also released on Reprise (and ironic that of all the Beatles songs out there - Ole Blue Eyes went for one of George's).  Back to the music, and again as Ella genereally does she makes the song pretty much her own.

The flip side is an okayish version of Bacharach & David's "I'll Never Fall In Love Again". 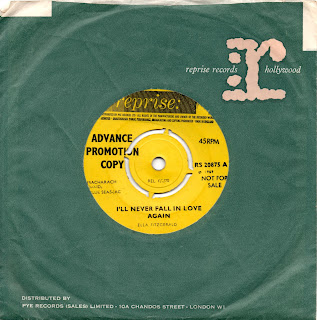