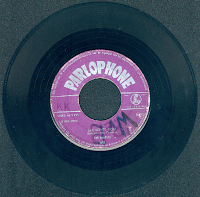 More rummagings from extensive collection of singles - threw up this one found on a Saturday's record safari in south Manchester a few years back.  Here's what I wrote up at the time about it:-

Dutch issue of the above - which interestingly uses the 50’s/very early 60's lilac Parlophone label and the typeface that only appeared on the 1st issue of the Fab Four’s first two singles on Parlophone. 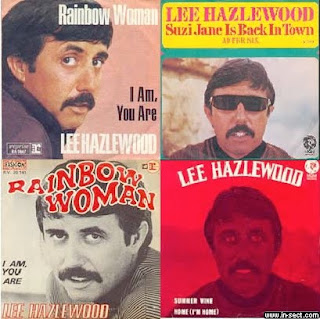 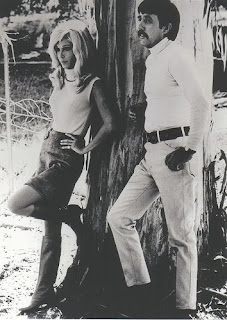 Been a while since I've done one these - mainly trying to think of a worthy subject matter.  And it doesn't get more worthy (or cool for that matter!) than the Pyschedlic Cowboy himself - Mr Lee Hazlewood.

My own awareness of his work like many, began with the collaborations he did with Nancy Sinatra.  Starting in 1965 when the semi-retired Lee was brought in to revive Nancy's then pretty much hitless career with the Reprise - the first sessions he did produced the classic that is "These Boots Are Made For Walkin' ".  Lee had realised that up to till then she'd been made to sing too high, and by taking her voice down into it's proper range the result is the aforementioned "Boots".  Lee's own version is well worth checking out as he catalogues in that dry sardonic voice of his just this record shouldn't be a hit - whilst counterpointing with the song itself.
If "Boots" is the first classic Lee & Nancy track then you can also add to that "Summer Wine" - which Lee had previously done as a duet with Suzy Jane Hokum - and the psychedelic/country masterpiece that is "Some Velvet

Morning". Obviously at the time the drug inferences were denied (albeit tongue in cheek - check the sleevenotes on the Nancy & Lee LP), and in the final interview Lee did - conducted by lifelong fan Richard Hawley - there's a typical wry comment on the lyrics for "Some Velvet Morning" being subject to scrutiny by the censors for the Nancy TV special that the song was commissioned for, and said network's censor being convinced by Lee that actually the lyrics weren't quite what he thought he heard!
My other personal fave Lee & Nancy track (apart from their great cover of "Jackson" and the Bond theme for "You Only Live Twice") is "Sugar Town" - which I remember as a kid being played on BBC Radio 2 in the mid 70's and not thinking twice about the actual lyrics!  It's only when you come back to things like this you realize exactly how much actually how much Lee Hazlewood managed to get away with - especially when you remember that sugar cubes were then popular delivery method for LSD.  And in a similar context from there's a track they did called "Sleep In The Grass".
Apart from the work he did with Nancy Sinatra, Lee had initially made his name as Duane Eddy's producer in the late 50's, and it was after that success that he decided to retire from
the music business - only to be brought into sort out Frank's daughter's then hitless tenure as already mentioned.  And very well he did too!
Additionally Lee had also worked with Dusty Springfield on one great track - "Free Ride" released in 1968 on Philips only in the US as far as I'm aware. Plus it was his own label LHI that singed Gram Parson's first group The International Submarine Band.
And last but not least there's Lee solo releases.  The earliest I have by him is a 45 released on the UK London label dating from 1960 featuring Duane Eddy "Words Mean Nothing" which is the blueprint/groundwork for pretty much of his subsequent work.  Next up is the stuff
released on MGM - his own version as previously mentioned is well worth checking out - as is prototype version of "Sand" - but the best of the lot is the sublime "Not The Loving Can".  I first came across it an MFP budget (re)issue of the 1966 LP 'The Very Special World Of Lee Hazlewood' found in a charity shop for £1! (Actually found it twice - firstly in the charity shop then later that same weekend @ a car boot!).

Then there's post Nancy stuff.  Firstly 'Cowboy In Sweden' which is another TV special and which features the following great tunes - "Leather & Lace", "Pray Them Bars Away", "No Train To Stockholm" and the wonderful "Easy & Me".  Secondly the 1972 set on Reprise 'Song For An Almost Lady' - which is effectively a song-suite dedicated to someone in particular - the highlights for me being the self-explanatory "If It's Monday Morning" and "Come On Home To Me".  Those last which I first heard on the wonderful Lee Hazlewood tribute album 'Total Lee' - which comes high recommended!!!
For now that's it on the wonderful world of the late great Lee Hazlewood - though I'm sure it's a subject I'll return to due in due course!
Though just to round off here's a sample of the sleeves for some of Lee's singles from the MGM era - enjoy!
Posted by BrianW at 14:15 4 comments: