In Praise of Captain Beefheart 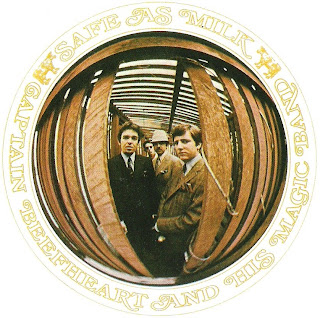 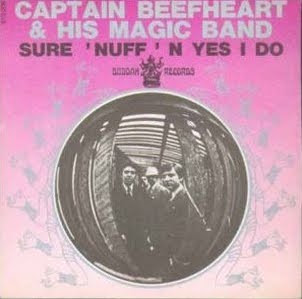 Just browsing the web and came across Eddie Chilton's 'No Fighting In The War Room' blog and an entry from last year in praise of the good Captain - Don Van Vliet, and yes I'm inclined to agree that for those looking for an entry point to the work of Beefheart & The Magic Band then 'Safe As Milk' is a pretty good place to start.
From the Muddy Waters/Howlin' Wolf inspired opener of "Sure 'Nuff 'N Yes I Do" through "Dropout Boogie" and then to the brace of tracks that kick off Side Two "Yellow Brick Road" (check the performance of this on the beach at Cannes on You Tube), "Abba Zabba" - and pretty much the rest of the album.  Plus Ry Cooder plays slide on this set.
The UK version was originally released on Pye International in 1967 as NPL 2810 and about then reissued about 6 months later on Pye's Marble Arch imprint (the copy I have) as MAL 1117 - which I'm guessing was after their UK/European tour, which includes their appearance of the beach at Cannes during the film festival - and with the following track listing:
Side 1: Sure 'Nuff 'N Yes I Do
Zig Zag Wanderer
Call On Me
Dropout Boogie
Electricity
Side 2: Yellow Brick Road
Abba Zabba
Plastic Factory
Where's There's Woman
Autumn's Child
It was then reissued again in 1971 on Buddah as 'Dropout Boogie' 2349002, this time with 2 extra tracks the sublime "I'm Glad" on side 1 and "Grown So Ugly" on side 2.  And of course since then it's been released on CD with the alternate versions of tracks from 'Strictly Personal' LP that had previously been issued as a CD in their own right.
From here on it's onto the aforementioned 'Strictly Personal' and the Zappa produced wierd-feat that is 'Trout Mask Replica'.  Which is whole blog in it's own right!
Posted by BrianW at 08:53