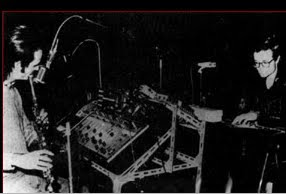 KRAFTWERK - THE KRAUTROCK YEARS
Kraftwerk’s formative years between 1970 and 1973 is the formative period that Ralf and Florian would rather forget - and yet the kernels of the Kraftwerk that we’re familiar with from Autobahn, via The Model to Tour De France all stem from this point in time.
From Organisation late 60’s free-form Pysche/Electonica/Jazz collective - Ralf Hutter and Florian Schneider-Esleben plus engineer/producer Conny Plank moved onto their next stage, took what was to hand, tweaked it, added wah-wah pedals to flutes and harmoniums, hung out with Can and Neu (who were in Kraftwerk during ‘71 - when Ralf Hutter actually quit for about 6 months), and produced 3 LPs of esoteric experimentation which has echoed down the years. And gained resonance as does so - listen now and you can hear where the likes of Stereolab drew their inspiration.
And listen closely and the adage is true that on each Kraftwerk album there’s the one track (or element on a track) that points the way forward to the next stage of Kraftwerk’s evolution/progress - and in this particular instance I’m thinking in terms of Kling-Klang from the 1971 LP Kraftwerk 2.  Which as any Kraftwerk fan will know (and tell you) is the name of both studio and label.  Plus a host of other wonderful esoterica from this their early formative Krautrock phase - Strom, Spule, and not forgetting Ruckzuk- Experience and Enjoy!
Posted by BrianW at 14:51