HAPPY BIRTHDAY MR. BOWIE - DAVID JONES IN SOME OF HIS PHASES!

Hello for 2013 - and a wishing you all a Happy-ish New Year!  First up for this year is the recent birthday boy - David Bowie and wishing you a Very Happy 66th.
This is done in roughly chronological order - so that the records are from the year that they were released - rather than in the case of the reissues from when they'd first appeared.  The reason being that as is this based on my record collection it's a question of cost - especially so in the case of Bowie's stuff from the 60's!

First up here's the sleeve for the Spanish issue of "Starman" from '72.  And more than likely Spain's introduction to Ziggy. 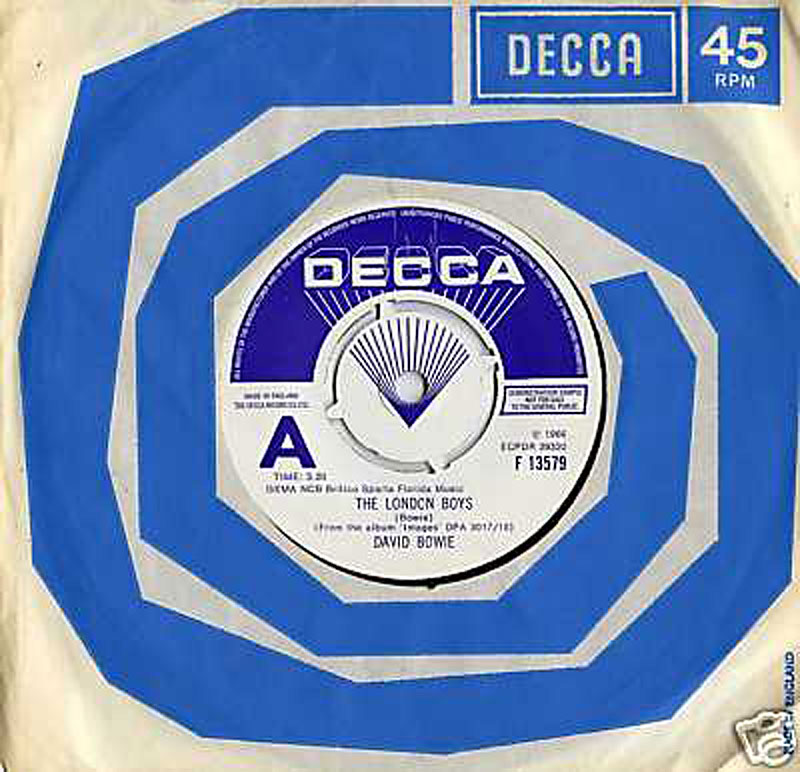 Next we have what's probably one of Bowie's earliest classics - "The London Boys" originally released on Deram in 1966 as the flip side to 'Rubber Band', and here reissued on Decca in 1975.
The song deals with the darker side of the Mod Dream and showing that's it not really all it's cracked up to be - whether Bowie's putting any of himself in this character I'm not sure - and works as cautionary tale of what can happen if you get yourself into something too deep too soon!

1978 saw Decca reissuing Bowie 1964 "Liza Jane" which had virtually zilch in the way of publicity - and unless you were a long term-fan how many people would immediately connect Davie Jones & The King Bees with Bowie?  Griping aside what's it actually like - pretty good in fact! A admirable bit of mid 60's British R'n'B - the song's one of those that been done by a lot of people down the years - and the other version that immediately springs to mind is the one Nina Simone did.  The B Side gives you a version of "Louie, Louie Go Back Home" which is no way as near as an Illustrated Record on Bowie would have you believe - OK it's got it's limitations but you can here the band giving it their all - and it is Bowie's debut after all!

The 45 for consideration is this Dutch only issue of the track from 1979's criminally neglected 'Lodger' LP - namely the Turkish/Reggae tune that is "Yassassin".  The title translates from Turkish as "Long Live" and apparantly inspired by Bowie's time in Berlin where he was living the Turkish quarter.  It's a track I like and shows that our man Mr. Jones (alongside Mr Eno) wasn't afraid of introducing non-western musical influences into his stuff! Plus you also get Hawkwind's Simon House on electric violin as well!

Here's the sleeve for the 1982 12" version of Bowie's version of the Brecht "The Alabama Song" - which confusing reuses the Ziggy era sleeve from the 1972 reissue of the 'Space Oddity' LP - whereas as anyone in the know knows that the version here is the stripped down 1980 version that acted as a primer for Bowie's return to the saga of Major Tom on 'Ashes To Ashes'.  Back to the music - "The Alabama Song" was recorded during the sessions for the 'Lodger' LP and was written by Bertolt Brecht and Kurt Weil for the 'Threepenny Opera' (also the origin point for 'Mack The Knife') and uses Brian Eno's Oblique Strategies to good effect with the drummer and bassist swapping places and shifting key changes and tempos for each verse.  Along with the stripped down version of "Space Oddity" the third track which thematically matches the other two is Bowie's version Jacques Brel's "Amsterdam".  And which despite the slagging off it gets in some quarters actually isn't that bad! 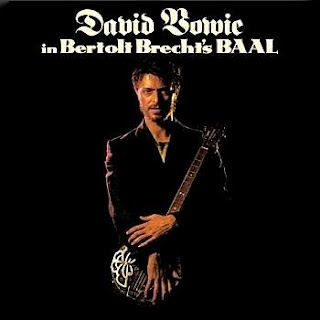 Bowie's other major bit Brecht was the 1982 drama he did for the BBC - his first major play "Baal".  The songs Bowie performed in were released as an EP and received a pretty positive response both on screen and for the music - which Bowie and producer Tony Visconti did at Hansa Tonstudios in Berlin where they'd done 'Low' and 'Heroes'.  In someways what you get with "Baal" is Bowie coming full circle. A decade after the theartrics and sexual ambivalence that brought him into the public gaze via Ziggy Stardust, here he is playing a character with at least some of those attributes on screen.  It's also pretty much the end of an era - as this would the last bit of original Bowie material that RCA would issue - before he moved over to EMI. 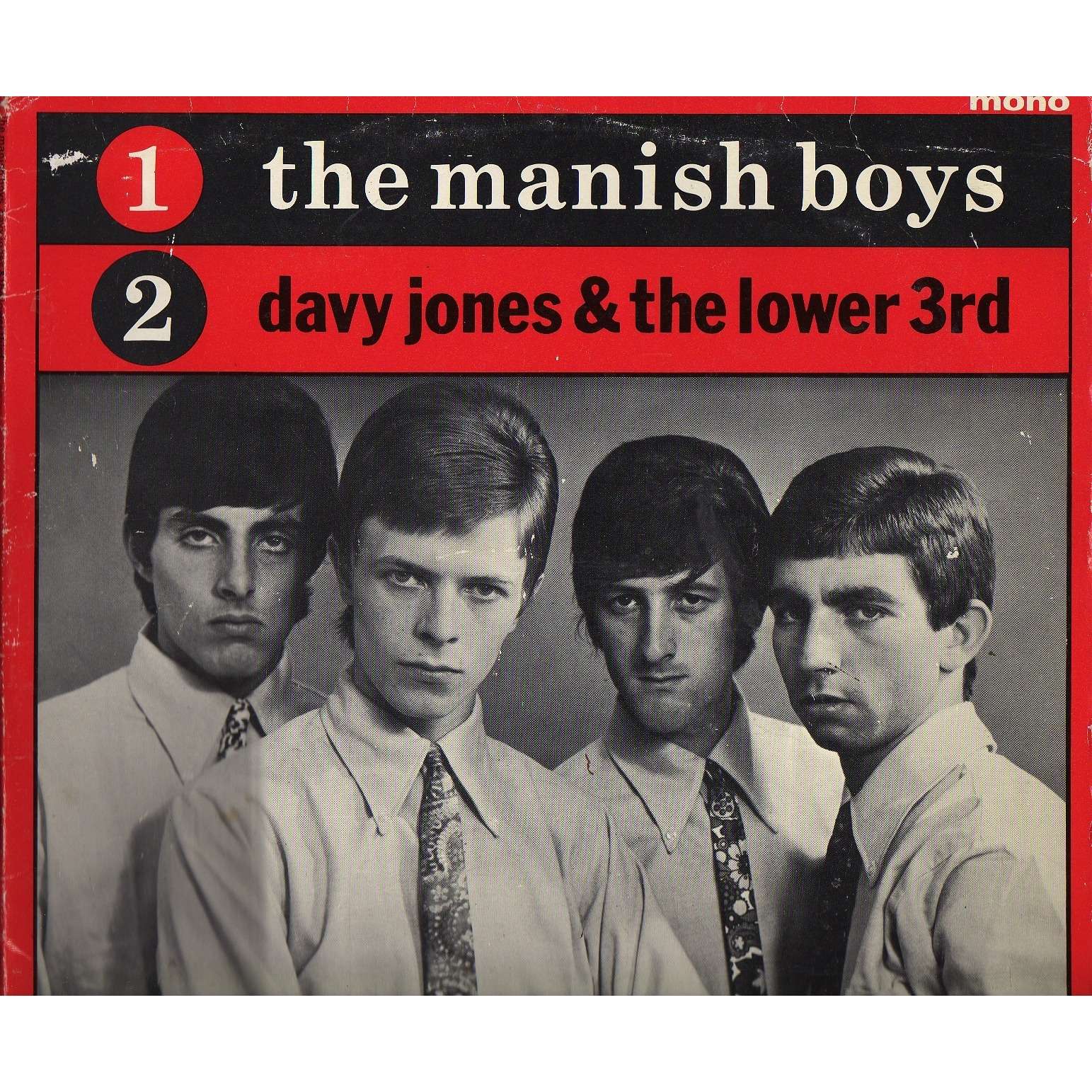 And on the subject of Bowie at EMI here's the two single he did for Parlophone in 1965 reissued as a handy 10" EP by See For Miles in 1982.  Side One gives you the single released by Bowie's group of the time The Manish Boys - first up a version of Bobby Bland's "I Pity The Fool" which features a blistering guitar solo from Jimmy Page. Next up is the first Bowie song to make it onto vinyl - the distinctly Mod-flavoured "Take My Tip".  Side Two has our man billed as Davy Jones & The Lower Third - and the tracks on offer here are firstly "You've Got A Habit Of Leaving" - which if it sounds slightly Who-ish should be too surprising as it's produced by Shel Talmy who was producing both bands at the time - and again featuring a Jimmy Page solo. The proceeding are rounded off with "Baby Loves That Way" another Bowie original and somewhat typical of the period.