RAY'S MOVIN'! (THE GENIUS SINGS THE OTHER HANK)

Looking this time round at this 1961 French EP from the Genius himself - Ray Charles. 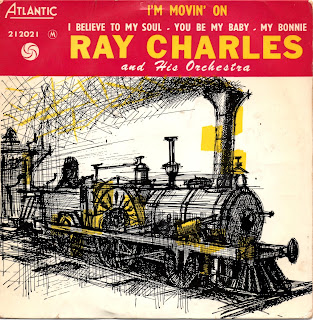 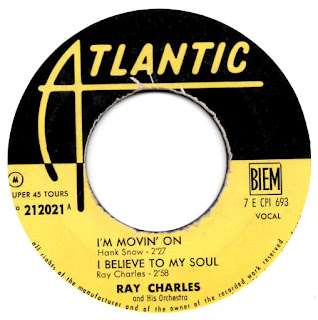 Side One kicks off with Ray's version of the Hank Snow tune "I'm Movin' On". The one thing that's noticeable to anyone that's familiar with the song is the version here has a different and slower train sound effect intro. As well as what seems like a slower tempo to the whole song.  Which makes me wonder if this is the original Mono single mix- and the better known version is the stereo LP mix.  Next up is the classic "I Believe To My Soul" which I first came to via The Animals version.  It's one of the few tracks that doesn't feature backing from the Raelets - all the voices you hear are Ray's.  Whether this was down to Ray falling out with Margie Hendrix (which happened on a regular basis by all accounts) I'm not sure - and perhaps that's who the song's written about. 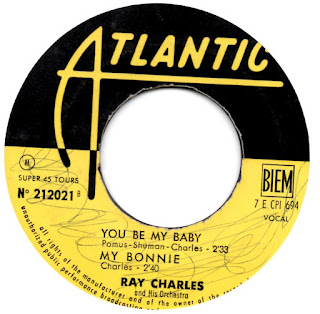 Side Two opens with "You Be My Baby" - co-written by Ray alongside Doc Pomus and Mort Schuman is a bit of a good one! Featuring as it does that classic gospel inspired call-and response between Ray and the Raelets and a great tenor solo from Dave Fathead Newman.  The proceedings are rounded off with "My Bonnie" which is given the classic Ray Charles treatment - and again one that doesn't disappoint! 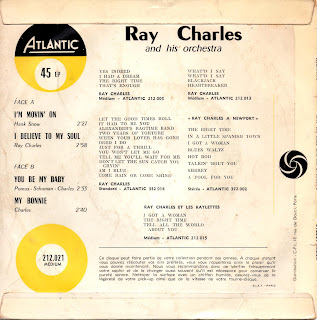