THE GOLD RIGBY & IRELAND SAYS 'LOVE ME DO' - SOME BEATLE ODDITIES 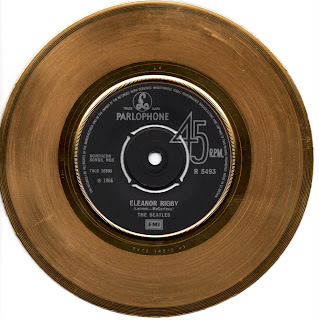 Couple of Beatle curios for today's post.  First up this "Gold" disc of the 1976 reissue of "Eleanor Rigby"/"Yellow Submarine".  Which some enterprising soul decided to take a standard copy of this single and paint it gold. Still plays fine, and the reason for buying it was that it caught my eye - and as I seem to remember I only paid a fiver for it Reddington's Rare Records in Brum, when they were directly opposite Moor Street Station back in the mid 80's. 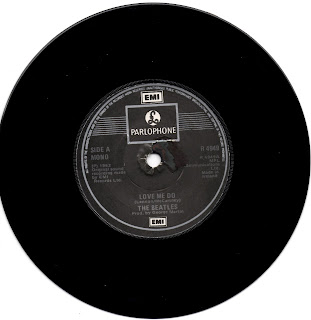 The second disc featured today is this Irish issued copy of "Love Me Do" which I found in Dublin a few years back.  The thing that immediately caught my eye is that label design is based on that used for the Beatles LPs issued in the UK from the late 70's through to the early 80's.  That, and the publishing's credited to McCartney's company MPL Communications Ltd.  I'm guessing this is the Irish equivalent of the 20th Anniversary release - although if anyone knows different then feel free to get in touch! And valuewise - £5 at a guess.
Posted by BrianW at 08:33