THE LOVE THAT WE SPOKE OF FOREVER - A SONG FOR ST. SWITHIN'S DAY

Didn't realize until I heard it on the radio this morning that today is St Swithin's Day - and suddenly remembered I had the song of the same name in the collection. So here it is - as today's post. 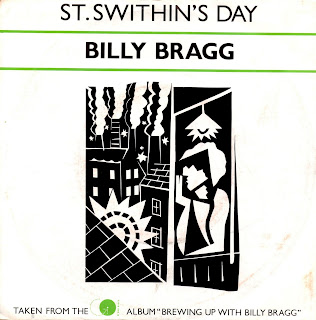 This 1984 german 45 is the first one the Bard of Barking Billy Bragg put out as a single (UK record buyers would have to wait for the 'Between The Wars' EP issued later in the year).  The song come his 2nd LP 'Brewing Up With Billy Bragg', and is a great poignant love song, and drawing on the fokelore tradition on what the weather will do for next 40 days dependent on how it is on 15th of July.  Listened to this just before writing this and it still holds up as a great tune - just shows what you can do with only a voice and a guitar - and I remember during the mid 80's just how bad music had gotten with yer Spandau Ballet, and the over produced PWL drivel.  Then this comes along like a complete (and very well needed) breath of fresh air. 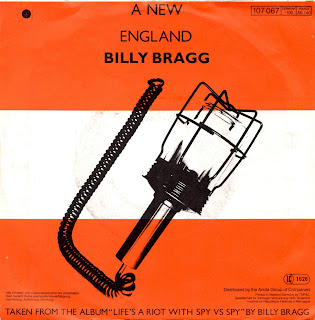 The flip side is the Billy Bragg anthem that is "A New England", and comes from his 1983 debut "Life's A Riot With Spy Vs. Spy".  I'd always found that title sliughtly puzzling till I read in an interview that it was the name he did his first solo gigs under after having got out of the army.  The song was of course a hit for the late great Kirsty McColl - and had an extra verse written for her to bring it up to the 3 minute mark; and in the process making it more radio friendly.  And it didn't do Billy Bragg's career any harm either!