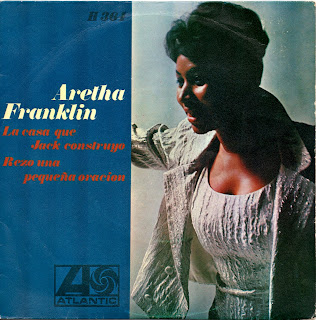 Today's offering is this 1969 Spanish issued single from Aretha.  The A Side gives you her version of the rather brilliant "The House That Jack Built"("La Casa Que Jack Construyo"), and until a fortnight ago I'd always assumed that this had been written specifically for Aretha.  It wasn't. The original is by Thelma Jones - issued on Barry in the States in 1968 - and Soul City over here in the UK a year later (possibly as an attempt to cash in on the success of the Aretha version), and more funk based that the better known Aretha version.


The flip side gives another classic bit of Aretha in the form of "I Say A Little Prayer" - Spanish translation/title being "Rezo Una Pequena Oracion". 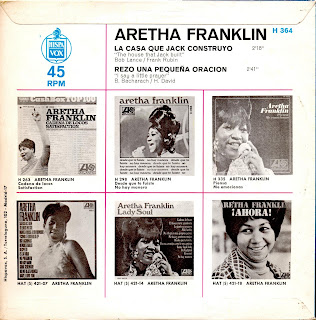 And of course the great thing about these european issues is that they come in picture sleeves - which UK singles didn't properly have until well into the 1970s - and the rear lists/shows the other Aretha Franklin 45s already issued in Spain up till that point.
Posted by BrianW at 06:01