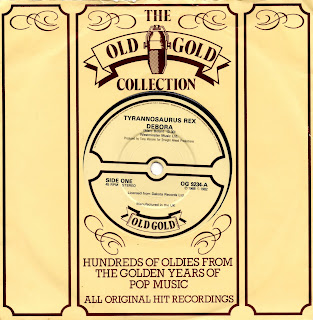 1982 reissue of these 2 tunes from Tyrannosaurus Rex - both originally issued in 1968 on the UK golden oldies Old Gold imprint.  The A Side label would lead you to believe that is a reissue of the 1968 single from Marc Bolan and Steve Peregrine-Took - but actually it isn't. What you get here is in fact the LP version from 'Prophets Seers & Sages' - which is the rerecorded and the palindromic retitled "Deboraarobed" - quite appropriate as the track is looped back itself half-way through.  And good bit psyche-folk as good as anything the likes of the Incredible String Band or the original Nirvana produced around this period


The flip side is the 1968 version of "One Inch Rock" - itself rerecorded for the first T.Rex LP.  Though that version is a lot rockier, as by that point Bolan had moved on from the Tolkien inspired pysche-folk of this period to that curious beast now known as Glam Rock. 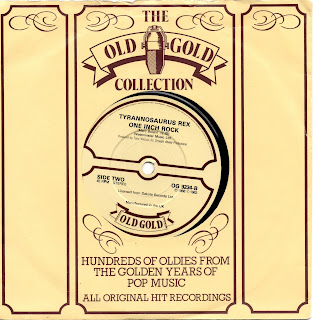