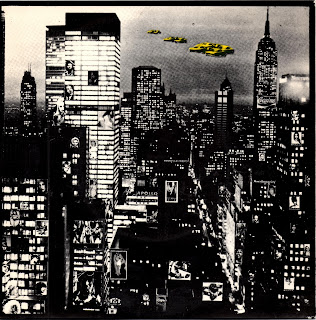 Today's platter under the spotlight is this 1976 EP from the Velvets - feat. 4 tracks that would later surface on the officially released 'VU' and 'Another View' LPs in the mid 80s - but here they are as they first appeared.  And it's the first of the Velvet's records that I was intent on getting - in this case found in the Plastic Factory in Brum and which cost me about a fiver, if memory serves.  The sleeve's one of those where you can spend sometime identifying/recognising who's on it - all 4 four Velvets plus Nico you can have for starters - the rest you can find for yourselves!  Valuewise worth around the £20 mark with its condition.

Side One is devoted to the rather excellent "Foggy Notion" - and just goes to show that Lou Reed was capable writing something that didn't deal with the crash-life lifestyles on the habitutees of The Factory and approaches being a comparatively straight-forward pop song, and as such more akin the Velvets' third LP.  Not surprising as it from the 1968/9 period and features Doug Yule in as replacement for John Cale. 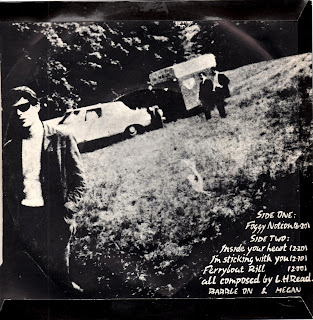 Side Two opens up with "Temptation Inside Your Heart" which is that strange beast a Cale era Velvets' track that sounds like he and Lou Reed are actually having fun in the studio - which this tongue-in-cheek Motown/Martha & The Vandellas tribute is without a doubt - ironic because it's pretty much the last thing the Welsh One did with the Velvets' before being sacked by Reed.  Next up is the delightfully quirky Mo Tucker showcase that is "I'm Sticking With You" - and I have to admit I prefer the slightly knackered sound quality here to the pristine quality on the officially released version on 'VU'.  The final track is another good on in the shape of "Ferryboat Bill" - again from around 1969 and officially issued on the 'Another View' LP.