(THERE'S) ALWAYS SOMETHING THERE TO REMIND ME - THE ORIGINAL! 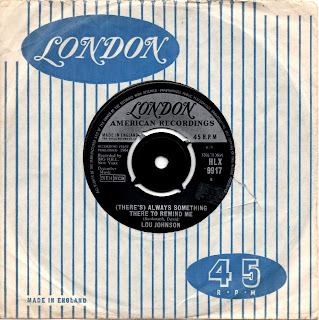 Today's dig from the collection spotlights this '64 offering from Lou Johnson.  The A Side is the original version of "(There's) Always Something There To Remind Me" - and a UK hit for Sandie Shaw.  The song was penned by Burt Bacharach & Hal David and (like most of their songs in the 60's) demoed by Dionne Warwick - whose own version was issued in 1968.  The backing vocals are the so-called super sessioners - namely Doris Troy, Dee Dee Warwick, and Cissy Houston, and you can certainly hear Doris Troy and Dee Warwick on this one. Bacharach was intent on pushing this version as a potential hit here in the UK even bringing Lou Johnson over to promote the song, only for it be gazumped by Sandie Shaw's manager Eve Taylor getting her signing's version out before the Johnson original - a practice common with UK acts issuing their cover before the US original versions.  And guess who had the hit? 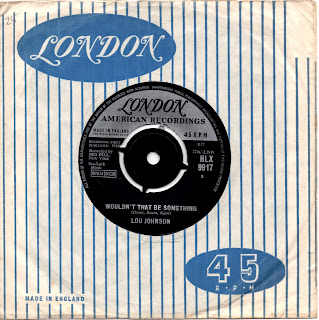 The flip side is a rather good N. Soul flavoured track in the shape of "Wouldn't That Be Something".  Although not having quite the dancefloor impact of Lou Johnson's subsequent 'Unsatisfied' issued the following year, this is still a bit of good 'un.  Valuewise, a mint copy of this is worth in the region of £25.