Just in case anybody's wandered across this post thinking it may cricket related - I can confirm that this blog doesn't do sport - less o' course it's Liverpool stuffing Scumchester Utd 3-1 like they did on Sunday!  Anyway... here's today post which features this Aussie EP from Bowie which gives three versions of the classic Eno co-written wowness that is "Heroes". 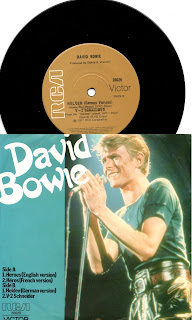 Side One kicks off the original English version. It's followed by "Heros" - which is the French version - and to be honest it's the least successful of the 3.  Whether this was done as an oblique tribute to the bard of Brussels Jacques Brel (one of Bowie's own heroes/influences) I'm not sure.

Side two of the EP offers up the brilliant German version "Helden" which works the best - and here the influences are kind of obvious - Kraftwerk, plus Bowie was living in Berlin at the time - as you are no doubt aware!  The proceedings are rounded off nicely with Bowie and Eno's tribute to the co-founder of said Kraftwerk Florian Schneider in the wonderful form of "V2-Schneider".