SUNSPOTS OVER WESSEX - AND OTHER ARCHE-DRUDE TYPE STUFF 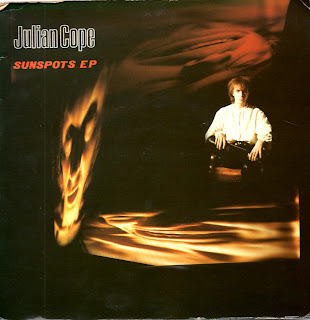 Today's post is request from erstwhile Playhawk drummer 'Ook the Duke, even though he has this vinyl platter under discussion today - Julian Cope's 1985 "Sunspots" taken from the slightly strange 'Fried' LP - and a fairly accurate description of the state of the Arch-Drude's brain cells around this period.  The song itself is one one the more accessible tracks from the album, and only has hints of the somewhat frazzled state the listener found him in on the rest of the album - including the 'Fear' era John Cale style visceral angst that is 'Run Run Raynard'.  And it really shouldn't come as any surprise that Mercury/Phonogram dropped him from their rosta - you can almost picture some record company exec fervently hoping that this time they'd get something that sounded more like The Teardrop Explodes - only for this to arrive and then weeping into his filofax in despair as a consequence.  Back to the music - the flip side of the 1st single gives you the somewhat more tripped out mushroom-influenced 'I Went On Chourney'. 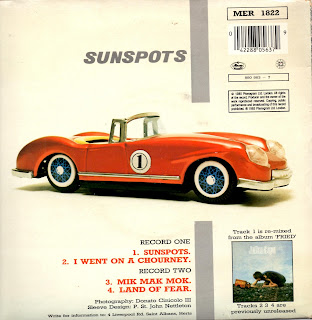 Record two has on it's A Side "Mik Mak Mok" - another trip through the frazzled brain of Mr Cope.  The final track is the rather good "Land of Fear" - which would've have a great single in its own right.  This is the second version recorded - the first/demo version can be found as the uncredited bonus track in the 'Sunshine Playroom' 12" where you can hear Star Wars starting/or finishing on the TV in the background.  The 3rd is the final track on 1999's '20 Mothers' album.

After this Julian kinda sorted himself out and signed with Island - and in due course produced the outstanding 'Peggy Suicide', then parted company with them after some choice comments about Bono/U2 and a certain Axl Rose in particular.  And now follows his own unique path which includes checking out a stone circles or other such neolithic sites or phenomena, delivering lectures on such and still releasing the occasional record when he feels like it.
Posted by BrianW at 10:16