Today's offering from the vinyl vaults is this 1972 single from Marc Bolan - and a prime example of what happens when an artist gets famous.  Namely their previous label shoves stuff out to capitalize on their former signing's new found fame (after getting a better deal from where they currently are) and in some cases (like here) issuing previously unleased stuff.  The downside of which - as happened here also, is that the artist concerned and/or their current label then issues an injunction to stop said material from being issued - and in the process producing an instant collectors item.  Especially if you happen to be called Marc Bolan. 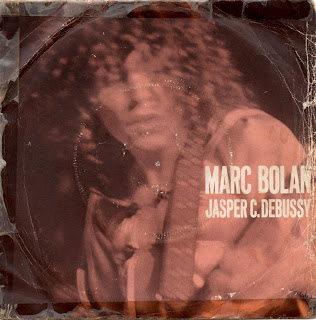 These 3 tracks were produced by Marc Bolan's then manager Simon Napier-Bell, who was also in charge the Yardbirds - as well as nominally John's Children, and subsequently Wham in the 1980s.  They date from around 1966 and just before Bolan was hooked up with John's Children, and before the band moved from Columbia to Track.  The A Side gives you "Jasper C. Debussy" which was done with a full band and features Nicky Hopkins on piano.  The flip side has Bolan solo on guitar and opens with his the single issued on Parlophone - the rather wonderful "Hippy Gumbo". It's followed by another bit of greatness in the form of "The Perfumed Garden Of Gulliver Smith". 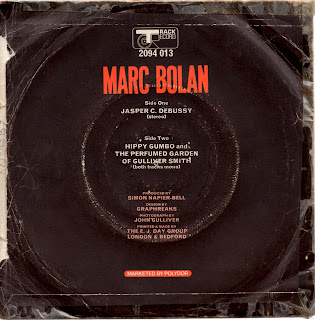 This like the parent album - then titled 'Hard On Love' were scheduled for release in 1972 - before the plug was pulled by Bolan and EMI - the album eventually issued in '74 retitled 'Marc - The Beginning of  the Doves'.  But this single wasn't - and with the picture sleeve will set you back £50 for a mint copy.  I got my copy for a fiver in Reddingtons old shop in Brum opposite Moor Street station, and initially thought it was issued in 1974 like the album - only to discover it was unreleased from 2 years earlier, and worth around the £25 as the sleeve's seen better days.

One thing to add - is who the hell (apart from Simon Napier-Bell and that bloke in Doncaster who runs the Marc Bolan appreciation society) thought it was a good idea to track these recordings an add new backing to them - and fucking them up in the process?  Made the mistake of buying the 'You Scare Me To Death' single when it came out in 1981 and swapped it the next day in Woolies for I think the then current Siouxsie & The Banshees offering.
Posted by BrianW at 04:29