Dutch issued single from Bowie's underrated 1979 LP 'The Lodger' and the last of the trio done with Brian Eno & which received pretty much zilch in the way of promotion from his record company (and one of the reasons Bowie gave from parting company with RCA in the early 80's).  But perhaps RCA's decision was coloured by the shock reaction to the video for the lead single from the album 'Boys Keep Swinging'.   The A Side is the rather good "Yassassin" - turkish for long live (in case you didn't know), and the best description is Turkish reggae.  And inspired by Bowie's stint in the turkish quarter - Neukoln itself a track on the previous LP. 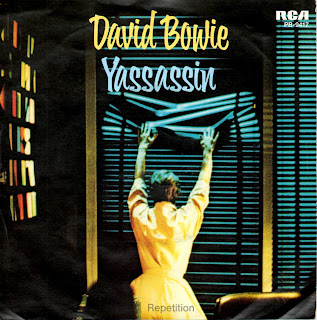 The flip side is the excellent "Repetition" and a very hard hitting song about the subject matter's shortcomings  - Johnny.  And Johnny's frustrations taken out on that person closest to him - his wife.  No wonder then that the song became a favourite of the feminist new wave bands of the late 70's - The Au Pairs recorded a version on their '79 album and featured it in their live set.